Thomas Rand Jr. House
The oldest building in the Case Estates Area is the 2 1/2 story Thomas Rand Jr. House at 131 Wellesley Street (ca.1790, Map #4, MHC 296), one of less than thirty houses from the Federal period (1776-1830) remaining in Weston. The five-bay, side gable clapboard farmhouse has been altered over the years with the addition of two bay windows on the front facade, flanking an entrance porch enclosed by latticework. The house has a four-bay west wing with a one-story open porch in front, supported by Doric columns. Twin interior chimneys are located on the main block behind the ridge. Windows are 6/6 with shutters.

Greek Revival Style Houses
Three houses were built in the mid-19th century in the Greek Revival style. #101 and 137 Wellesley Street are particularly intact and can be considered among the best examples of this style in Weston. These houses represent front and side-gable versions and have the formal portico, fluted Doric columns, sidelights, and wide corner pilasters and entablature typical of the style.

Nathan Barker House
The 2 1/2 story Nathan Barker House at 101 Wellesley Street (ca. 1843, Map #7, MHC 327) has a three-bay gable front facade with one-story portico along the front (south) and part of the east facades. Flush boarding is used on the first story to achieve a smoother, more formal effect. The house has a six bay, 2 1/2 story east wing with a second entrance marked by paired Doric columns. On the main block, windows are 6/6 with shutters. 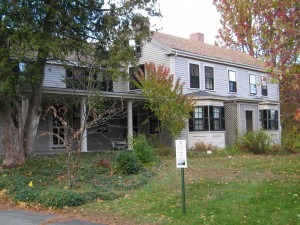 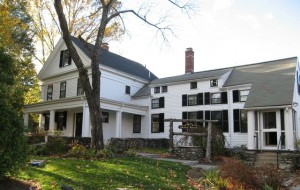 Train/Milton House
The Train/Milton House at 137 Wellesley Street (ca.1847, Map #1, MHC 291) is a 2 1/2 story, five-bay, side gable variation, with a one-story, Doric columned-portico extending across the front. This house has 6/6 windows with shutters, twin interior chimneys behind the ridge, and two pedimented dormers at bays 2 and 4. A small ell extends to the rear, and from the ell, a one-story rear entrance room and one-car garage project out to the east.

Otis Train House
The Otis Train House at 138 Wellesley Street (ca.1855, Map #17, MHC 289) exemplifies the Greek Revival style in more subtle features, including the wide entablature, transom and sidelight arrangement at the entrance, and well-preserved interior features including the circular staircase and fireplace mantels. The 2 1/2 story house consists of a 2-bay main block and an east wing with Queen Anne details, probably dating to the late 19th century. A one-story porch, which appears to date about the turn of the century, is located at the junction of the main block and wing. Windows on the front facade have simple lintels and 6/6 sash, with shutters. Two small interior chimneys are located at the ridge line on the main block. A frame barn is located behind the house. (Map # 18). 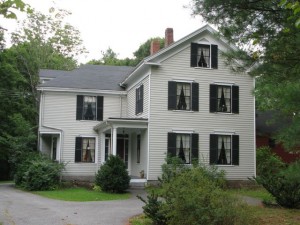 84 Wellesly Street
The 1 1/2 story clapboard house at 84 Wellesley Street (ca.1857-1866, Map # 11, MHC 330), is one of the best examples in Weston of a small scale Italianate bracketed cottage. Notable for its intact quality and pastoral setting at the edge of the 35-acre town field, the house has an L-shaped main section with characteristic paired brackets at cornice level, bay windows at each end of the L, and paired windows above the bays. At the bend of the L is a one-story screened porch sheltering the front entrance. The house has a small interior chimney on the main block at the ridge line and two rear additions extending east and north which are not bracketed. Located behind the house are two large frame outbuildings, one a barn with a stone foundation and clapboard siding (Map #12, MHC 331) and a second, used as a hay barn, which has vertical boarding and no foundation (Map #13, MHC 332). This simple weathered structure, which contributes much to the rural landscape, is in need of stabilization.
James Case House
The 2 1/2 story Shingle Style James Case House at 89 Wellesley Street (1889, Map #10, MHC 329, now called Case House), designed by Ernest Boyden, is one of the last great 19th century estate houses in Weston. The large brick and shingle mansion retains its 19th century grandeur but is in need of exterior maintenance and restoration.

Roof & Facade
The gambrel-roofed structure which is basically rectangular in plan, with a kitchen wing and an incompatible 1950s addition, both extending from the northwest corner. The principle (west) facade originally had a porte-cochere, and the present modern glass entrance porch obscures the original effect. 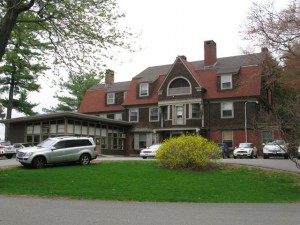 Principal Features & Layout
A one-story room projects out from the main body of the house on the Wellesley Street side; this once connected with a one-story piazza which has been removed. On the east side, the principal feature is a hexagonal second floor sun room added in 1913. Inside, the house has remained largely intact and is used as school administration offices.

Interior Details
Interior details include a wide entrance hall extending the length of the house, with a floor-to-ceiling Romanesque brick and brownstone fireplace, beamed ceiling, golden oak paneled walls, and a built-in seat on the side of the impressive oak stairwell. Just to the west of the main house is a small carriage shed (Map #9) which was once attached to a large barn. Part of the foundation remains from this barn, which burned in 1947.

Queen Anne Meets Colonial Revival
Between 1893 and 1900, three houses were built along the south side of Wellesley Street utilizing elements from the Queen Anne and Colonial Revival vocabulary . As is typical of Weston, these houses are simple rather than high style versions of the asymmetrical 2 1/2 story, front gable, late 19th century house.

Isaac W. Hastings House
The Isaac W. Hastings House (132 Wellesley Street, ca.1893, Map #21, MHC 294) is the most architecturally notable of the three and features a bay window and recessed entrance porch at level one, with recessed balcony area and spindle screen above. The porch and balcony are supported with turned posts. Windows are most commonly 2/1 with shutters. A large 1 1/2 story shingled barn is located at rear (Map #22, MHC 295).

Hillcrest Clubhouse
In 1909 Marian Case established Hillcrest Farms (see historical narrative) and most of the buildings from the next three decades were built for this horticultural enterprise. In 1910, the Hillcrest Clubhouse at 133 Wellesley Street (later the Case Estates Schoolhouse (Map #3, MHC 293) was under construction across the street as a residential building. (The original location is now the root cellar at Map #28) The house was moved to its present location and converted to a clubhouse/schoolhouse with meeting rooms. The simple two-story, three-bay aluminum-sided structure is topped by a bell cupola at the peak of the hipped roof. Windows are generally 6/6, and the house has a shed-roofed entrance porch and a one-story open porch across the east side.

Hillcrest/Case Estates Cow Barn
The Hillcrest/Case Estates Cow Barn at 101 Wellesley Street (1916, Map #8, MHC 328) is an unusual example in Weston of a stucco barn, notable also because of the harmony between building and landscape. The simple 1 1/2 story pale pink stucco structure was designed by the firm of Fox and Gale and includes a few distinctive architectural details such as a large tin vent with cow weather vane at the ridge line. The gable end faces Wellesley Street and has a semi-circular window in the attic story. The slate-roofed building has an irregular fenestration pattern with numerous entrances and six-pane fixed sash windows in groups of 2,3 and 5.

86 Wellesley Street
About 1921, the 1 1/2 story, three-bay Colonial Revival cottage at 86 Wellesley Street (Map #15) was built as housing for the gardener of the James Case estate. The most prominent features are the center entrance porch and the large shed dormers at front and rear. The original 6/6 windows on each side of the center door have been replaced with larger paired window/doors. The one-story frame barn, built for wood storage, (Map #14) needs stabilization and repairs.
Hillcrest/Case Estates Barn
The Hillcrest/Case Estates Barn at 135 Wellesley Street (1927, Map #3, MHC 292), designed by Weston architect Samuel W. Mead, is unusual in its brick material and style, which features four truncated gables. The large barn is rectangular in plan, measuring 71’ by 46’ with a greenhouse extension at the rear west. The structure is built into a slope to allow ground level access to both the basement and first floors. The interior has unpainted vertical boarding and other original features.

Mid-20th Century Houses
Located behind 132-128 Wellesley Street are two mid-20th century houses which overlook the rolling fields of the south portion of the Case Estates. These houses are not visible from the street and do not impinge on the historic landscape. 130 Wellesley Street (Map #24) is an example of the International Style designed in 1952 by architect Lionel LaRochelle. 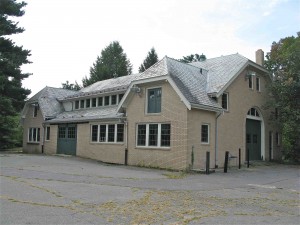