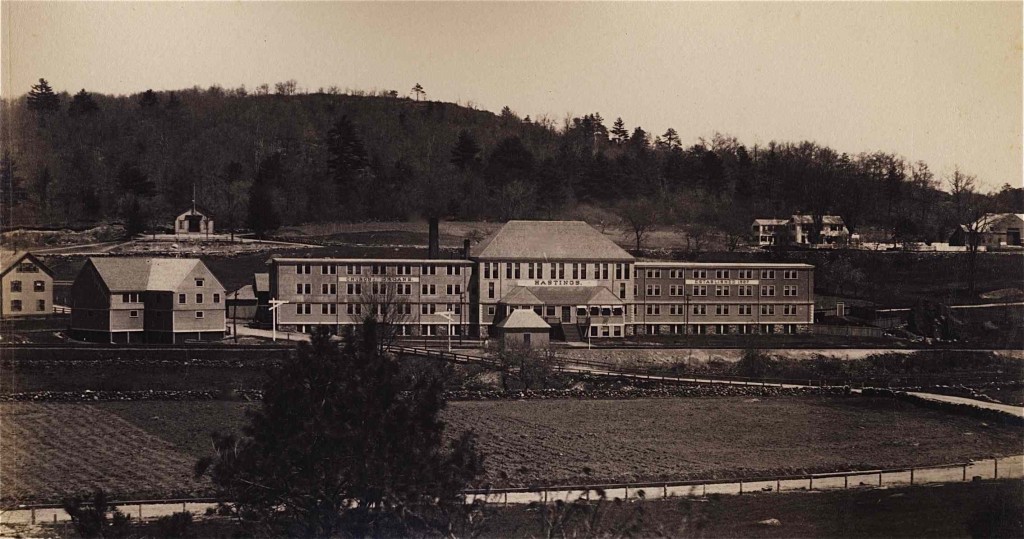 The Kendal Green Historic District, listed on the National Register of Historic Places on March 1, 2001, includes the following properties: 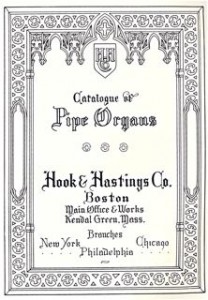 Description
The Kendal Green Historic District is a residential neighborhood in northeast Weston, approximately 50 acres in size, extending three-quarters of a mile along historic North Avenue (Route 117) between Hobbs Brook Road and Viles Street. North Avenue is a well-traveled two lane state highway running in a northwesterly direction from its point of origin on Route 20 in Waltham through Weston to Lincoln and points west. 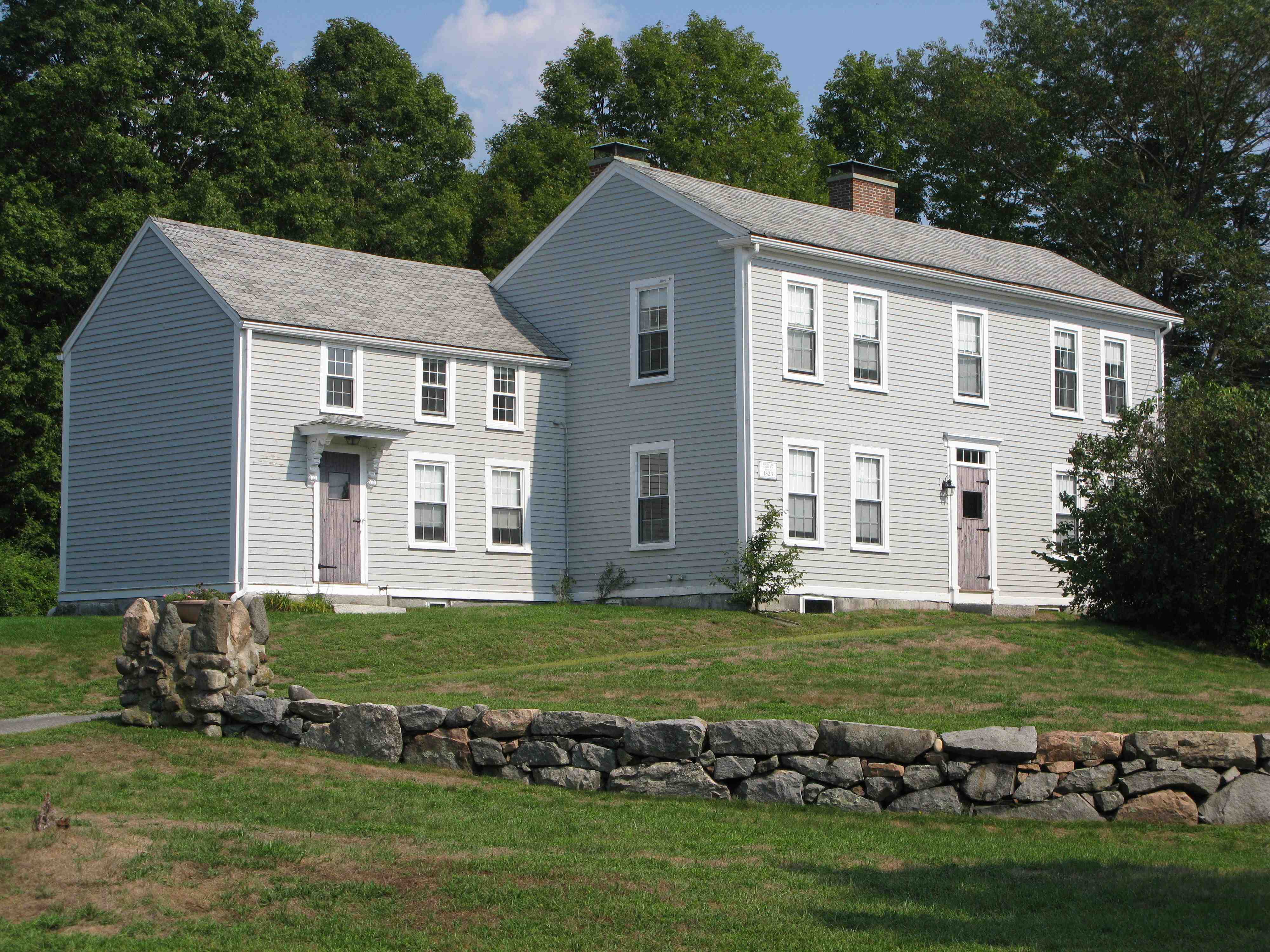 District Boundaries
The district boundaries diverge from North Avenue to include a turn-of-the century railroad station on Church Street and factory worker housing on Viles Street and Brook Road. North Avenue has been an important road since the early days of settlement and the Kendal Green Historic District is the location of a diverse group of architecturally significant buildings dating from the early 18th to the early 20th century.

Historical Themes
These buildings represent three historical themes in the development of Weston: its origins as a rural, agricultural community, the importance of industry, and the appeal of Weston as a summer resort community. Because Kendal Green developed over time and includes many different building types-from farmsteads to worker housing to a summer resort hotel-the district has no single visual theme. Its appeal is, rather, the architectural significance of the individual structures and their irregular placement along the roadway to create a pleasant and diversified streetscape enhanced by mature trees, fieldstone walls and retaining walls, and occasional open fields and woodland.

Resources
The district contains a total of 48 resources, of which 40 are contributing (36 buildings, two sites and two structures) and eight are non-contributing. Of the 36 contributing buildings, six are barns and outbuildings. The two contributing structures are a turn-of-the-century gazebo and well. The two contributing sites are the site of the Hobbs Tannery and the site of the Hook and Hastings Organ Factory playing field. The eight non-contributing resources are all small, one-story, post-World War II houses, in ranch, contemporary or traditional styles. Most are unobtrusive because of their setback, their siting either above or below the grade of North Avenue (Route 117), and/or ample vegetative screening.

Design Character
The district boundary has been drawn to exclude a number of 1950s ranch houses on the south side of North Avenue which do not contribute to the character of the district. The properties within the district are in good to excellent condition and have been well-maintained. In many cases, original design character and historic building fabric are completely intact. The houses at 225 North Avenue, 126 and 130 Viles and 83 and 85 Brook Road are covered with aluminum or vinyl siding which hides the trim boards and, in some cases, the original shingles; however, porch trim and hoods over doorways have been preserved.

Features of the Area
Important natural and man-made features have shaped the appearance of the district. Just south of North Avenue, running roughly parallel to the road, is Stony Brook, a major tributary of the Charles River. Stony Brook flows through the district at only one point, when it crosses under Viles Street. Although otherwise just outside the boundary, Stony Brook represents the topographical low point of the area. A second major tributary, Hobbs Brook, flows through the southern end of the district and joins with Stony Brook just south of the railroad tracks. Hobbs Brook has been dammed since the early years of settlement to form a pond known as Hobbs Pond and later Brown’s Pond. Like Stony Brook, Hobbs Brook and Hobbs Pond are topographical low points.

Cat Rock Hill
The topographical high point of the area is Cat Rock Hill, which rises to an elevation of 90 feet above sea level just outside the district, on the north side of North Avenue near the intersection of Viles Street. Within a distance of little more than 1500 feet in some areas, the land slopes down from the high point of Cat Rock Hill to the low lying marshland along the banks of Stony Brook. The path of the roadway runs about halfway between the pinnacle and the brook. In the mid- 19th century, engineers for the Fitchburg Railroad (now the Boston and Maine) chose the same natural passageway for the route of the railroad tracks which form part of the southern boundary of the Kendal Green district.
Preservation
No other district or potential district in Weston includes such a wide variety of architectural styles and building types within such a small area. The oldest structure is an early 18th century tavern with a saltbox roofline. The area contains several 18th century houses and two Federal period farmhouses. Well-preserved early barns reflect the town’s rural, agricultural roots. In the period farmhouses. Well-preserved early barns reflect the town’s rural, agricultural roots. In the late 19th century an organ factory was located within the district, and the Shingle Style factory owner’s house, stable and caretaker’s house still survive, along with twelve Shingle Style and Queen Anne houses built by or for factory workers. 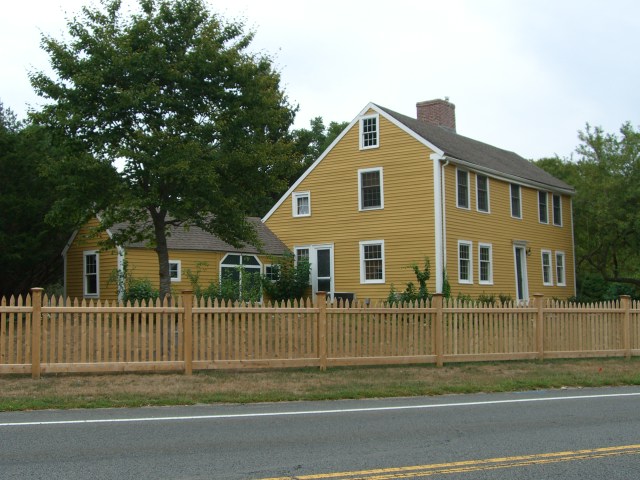 Hotel & Cottages
Also within the district is a well-preserved Shingle Style resort hotel and two associated residences, one Shingle Style “cottage” and the second, an unusual log bungalow. The area includes a fine Mansard cottage and small shop, a turn-of-the-century railroad station, a house used for half a century as a general store and post office, and an all-concrete early 20th century fire station.

Location
With only one exception, 18th and early 19th century houses were built on the north side of North Avenue, on the upland side of the road, where they face in a south or southwesterly direction. Land on this side of the road, especially from #87 to #199 is flat and well-drained. Between #219 and #237 North Avenue, house sites on the north side of the road are steeply sloped in back, as they are built along the side of Cat Rock Hill. The houses on Brook Road are located on a flat plain, but just behind them the grade rises steeply upward again.

Placement & Configuration
Because the district developed over more than two centuries, the size and configuration of house lots, the type of houses, and the placement and setback of houses is irregular. Building setbacks vary between about 30 and 250 feet. The largest parcel within the district is 11.6 acres at the southwest corner of North Avenue and Viles Street and the second largest is the 5.58 acres of conservation land. With these two exceptions, few properties are over one acre. The largest lots are on the north side of North Avenue. Factory worker houses on Viles Street and Brook Road are built on small lots ranging from about 1/5th to 1/2 acre.

Landscape Features
Landscape features contribute to the character of the district. Many of the houses have grassed lawns, perennial gardens and mature foundation plantings, along with mature trees- some of exceptional size. The district is notable for the quantity and variety of stone walls, particularly along North Avenue. Because many of the houses on the north side of the street are sited on slightly elevated lots, this side of the road has fieldstone retaining walls at 87, 135, 163, 191, 199, 219, 225, 227, 231 and 237 North Avenue and also 9 Marshall Way. The 11-acre property at 190 North Avenue at the corner of Viles Street is enclosed on the two street sides with single and double-laid pink granite walls. The wall in front of 237 North Avenue is fieldstone with a cast stone cap. Notable stone piers marking driveway entrances can be found at 163 North Avenue and at the former summer resort at 135 North Avenue, where the rock-faced granite block piers have pyramidal caps.
Francis H. Hastings Property
The principal open land within the district is the 11.6-acre Francis H. Hastings property, location of the factory owner’s home and the factory site. Except for the landscaped area around the house, this property is now deciduous woodland which has grown up on land which was previously deforested. This largely undeveloped land is important to the character of the district.

Conservation Land
North of the F.H. Hastings House site, the property slopes down sharply toward the railroad tracks and Stony Brook. The second large parcel of open land, 5.5 acres, is town conservation land maintained as marsh and woodland. The town also owns a 2.6-acre field at the corner of Viles and Brook Road used for baseball and general recreational purposes. This open field enhances the streetscape at the south end of Brook Road. 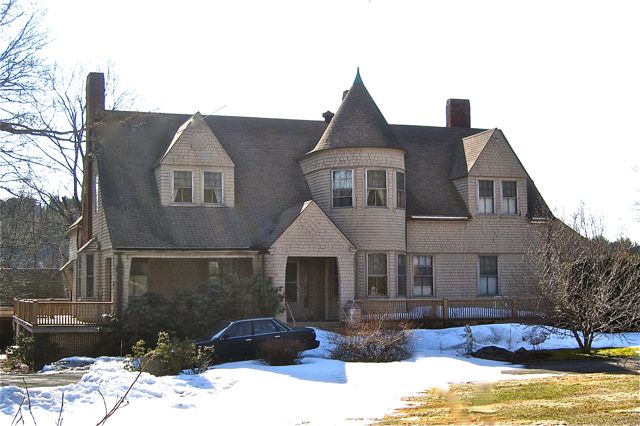 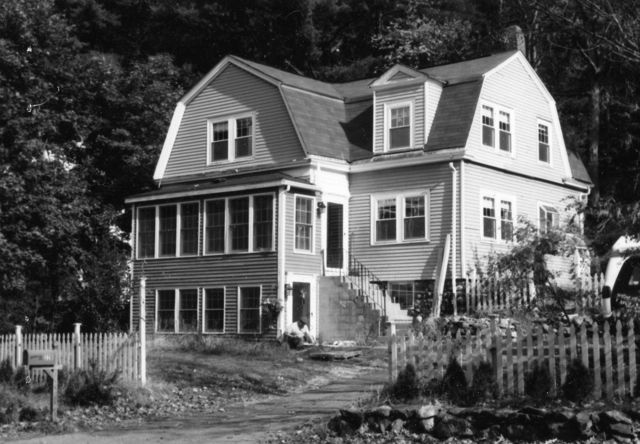 1999 photograph of 225 North Avenue, one of a group of three houses built for organ factory workers on North Avenue. This house was destroyed in a gas explosion
Government Websites by CivicPlus®
[]