The Pinecroft Subdivision Area was documented by the Weston Historical Commission in 2007. It includes the following properties: 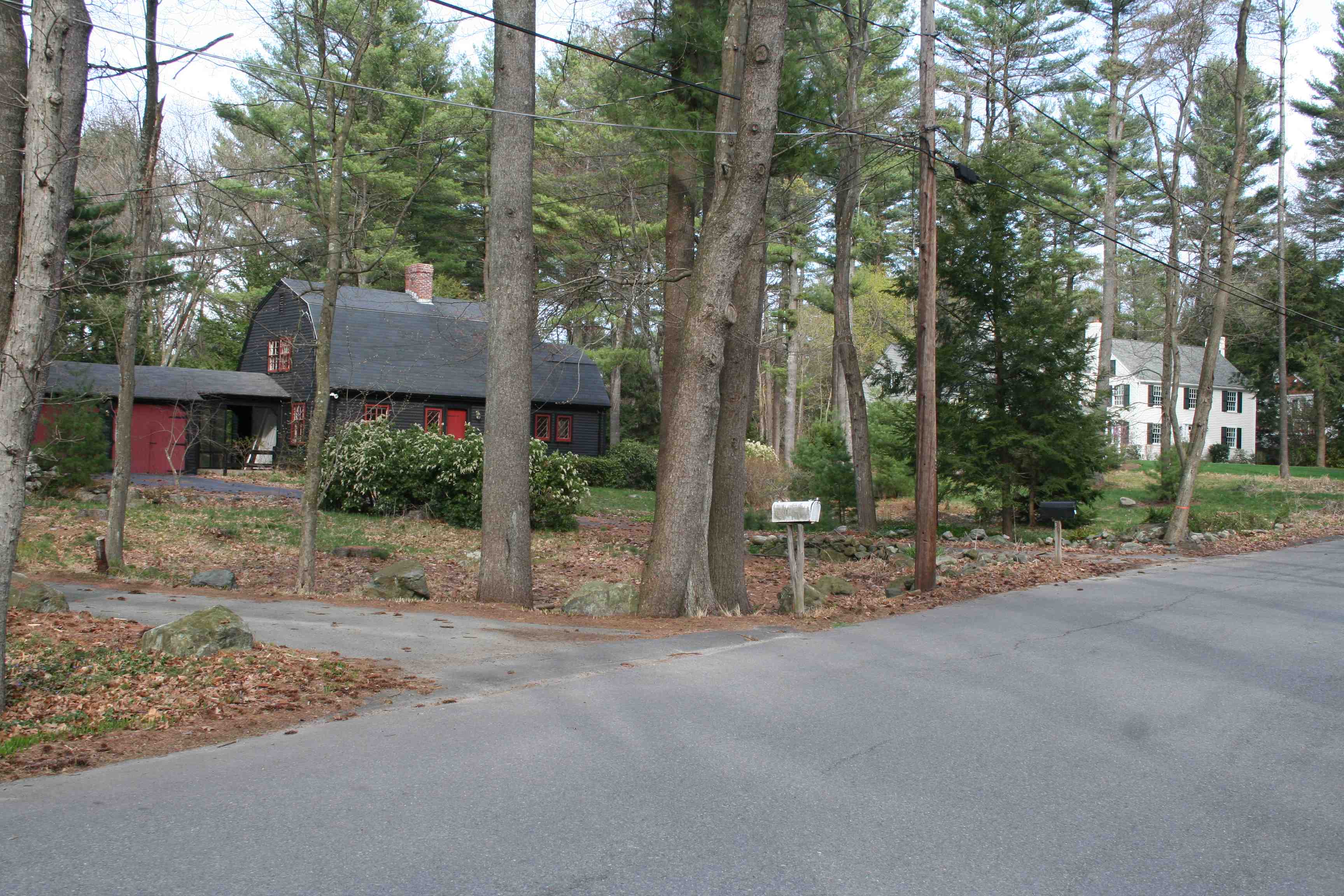 Architectural Description
The Pinecroft Subdivision Area is a quiet, wooded neighborhood of middle-class houses, most built between 1930 and 1955. By far the most common style is the Colonial Revival in its many variations, but some Ranch houses were built after World War II. Because of the similarities in scale, setback, massing, materials, and style, the area has a pleasant unity and sense of place.

Houses & Styles
The area includes a total of 54 houses ranging in date from an 18th-century farmhouse to a large brick Colonial Revival built in 2002. Three-quarters of the houses date between 1930 and 1955 (18 from the 1930s, 12 from the 1940s, and 11 from the early 1950s.) The two most common styles are the traditional two-story, three-or-five-bay center entrance Colonial, the one-and-one-half-story Cape, and the Garrison Colonial. Most of the 1950s examples are single-story Ranch houses.

Building Materials & Size
The most common building materials are shingle and clapboard; and most houses feature some kind of architectural accent, for example, a well-detailed door surround or 8/12 windows sash. The original size of the houses averaged about 1,500 to 2,500 square feet on lot sizes ranging from as little as 15,000 square feet to over 65,000 square feet. Houses in the area are generally in good to excellent condition. They are not elaborate and most were probably the work of builders rather than architects. Their appeal stems from their unpretentiousness and deep-rooted traditionalism. Unfortunately, the character of the area is being gradually eroded with the construction of new houses that are out of scale and/or more formal in style and landscaping.
Nathaniel Bemis House
All houses in the area are 20th century with one exception, the five-bay, center-chimney Nathaniel Bemis House, 216 Conant Road (c. 1785, Map #10, MHC 300, Photo #1). Window fenestration is symmetrical, with the 6/6 sash arranged in a 2 -1-2 pattern. Also on this property is a large shingled garage (Map #10A).

Style Proportions
The proportions of 216 Conant Road are typical of the 18th century and may have provided some inspiration for the size and style of houses in the neighborhood. Indeed, the three-bay house directly across the street at 217 Conant Road (1934, Map #11, MHC 1160, Photo #2) is very similar in size and features a similar vestibule. Window sash here is 12/12.

J. Irving & Frank Connolly House
One of the first houses in the Pinecroft Subdivision was built for the developers, J. Irving and Frank Connolly. 16 Viles Street (1930, Map #48, MHC 1191), a well-detailed Colonial Revival example, may have been intended to set the tone for the new neighborhood. The three-bay shingled house has a bold portico marking the center entrance as well as well-detailed one-story sun porches extending from each gable end.

Garrison Colonial Houses
The First Period houses of the late 17th and early 18th century inspired a number of houses within the area including the house at 15 Viles Street (1934, Map #47, MHC 1190, Photo #7), which has a second floor overhang, irregularly-shaped clapboards meant to look hand-hewn, and porch supports intended to look like gunstock posts. Houses with this overhang, a subtype known as the Garrison Colonial, were particularly popular in the late phases of the Colonial Revival, from about 1935 to 1955. Another example is at 9 Montvale Road (1938, Map #25, MHC 1172, Photo #3). The house at 27 Viles Street (1934, Map #50, MHC 1193) also has an overhang separating the stone first story from the shingles above. Window types include 8/12 and double casement windows. The house at 30 Pinecroft Road (1940, Map #41, MHC 1185, Photo #5) also draws on the vocabulary of First Period houses in the use of multiple small casement windows and a board-and-batten front door with strap hinges. 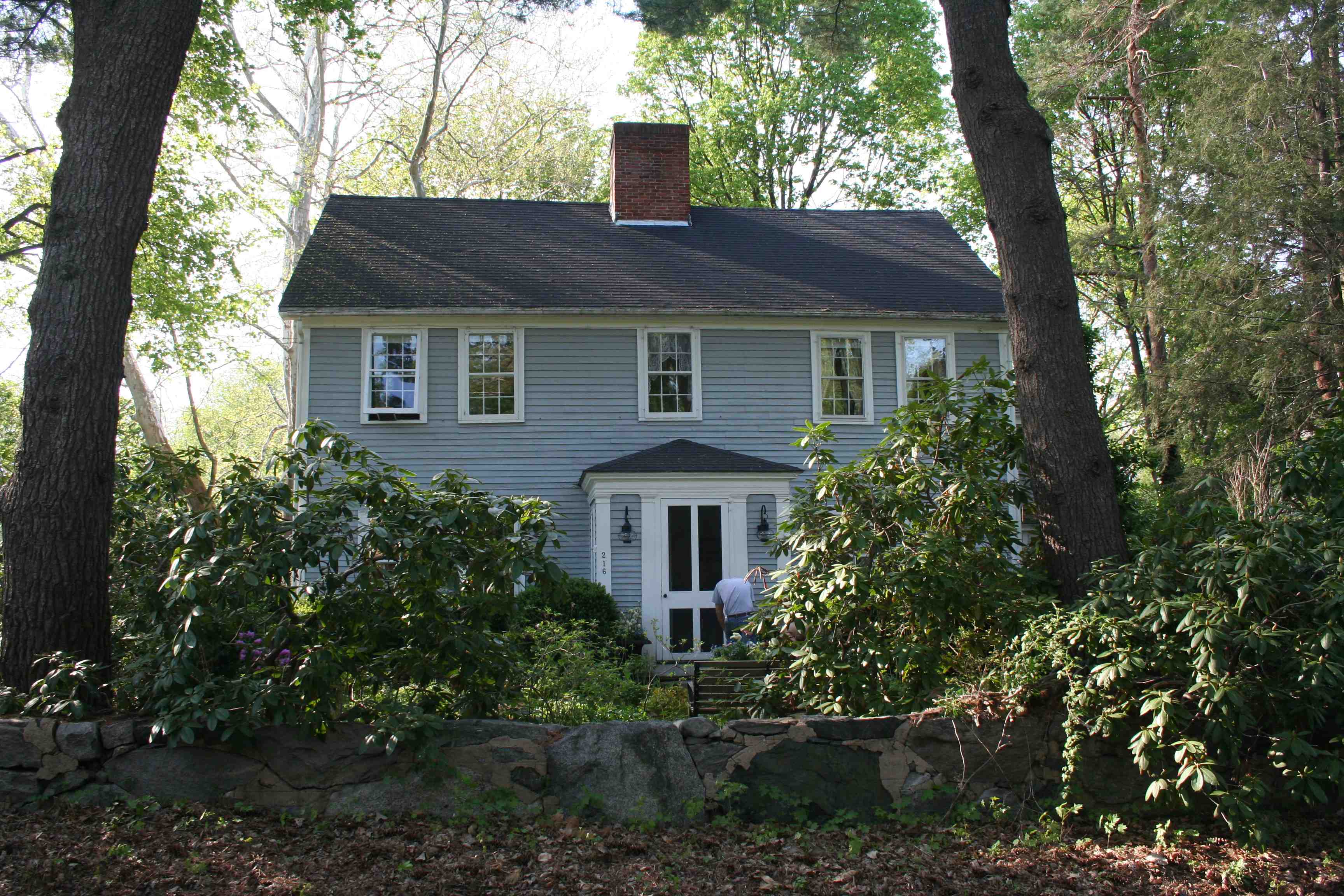 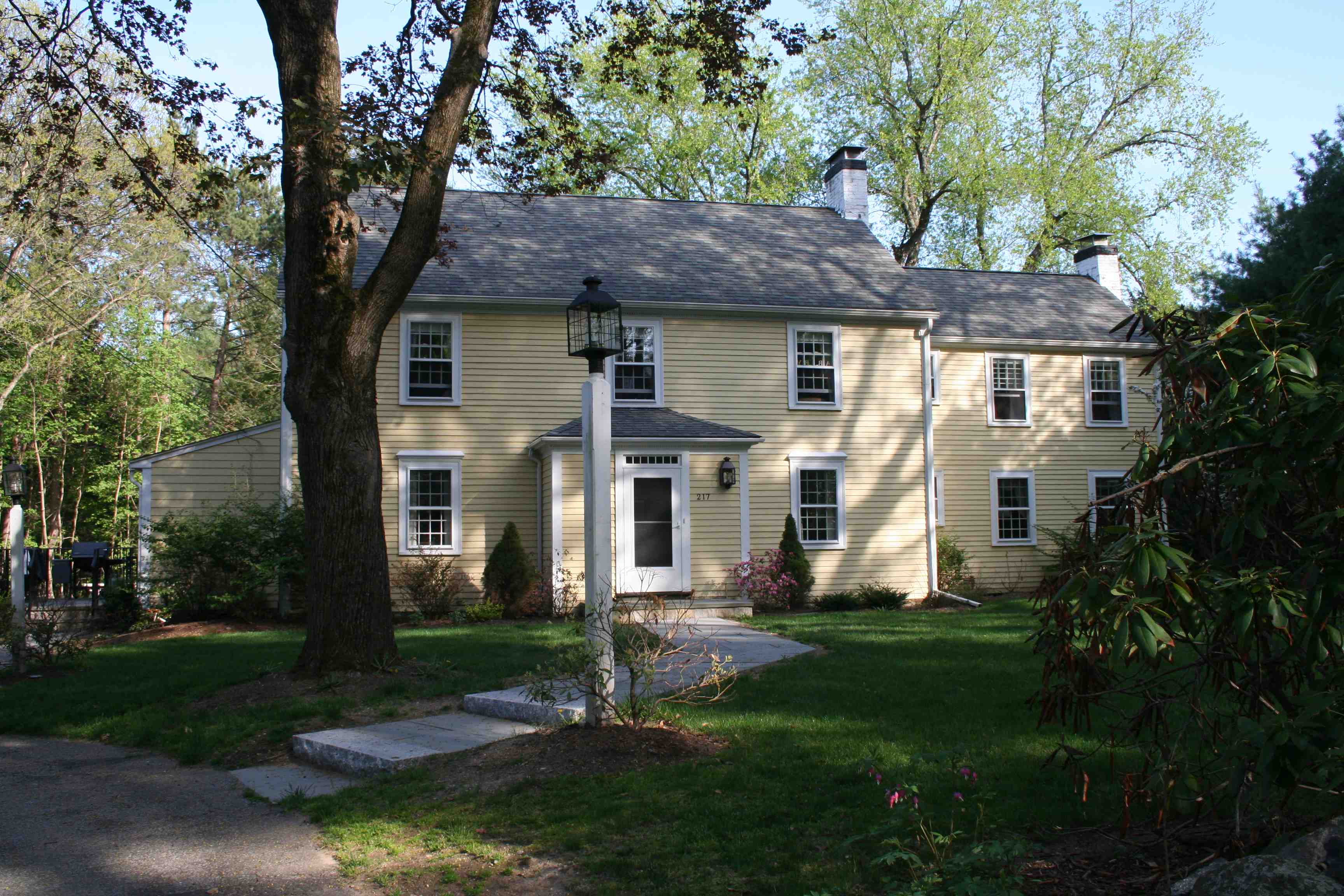 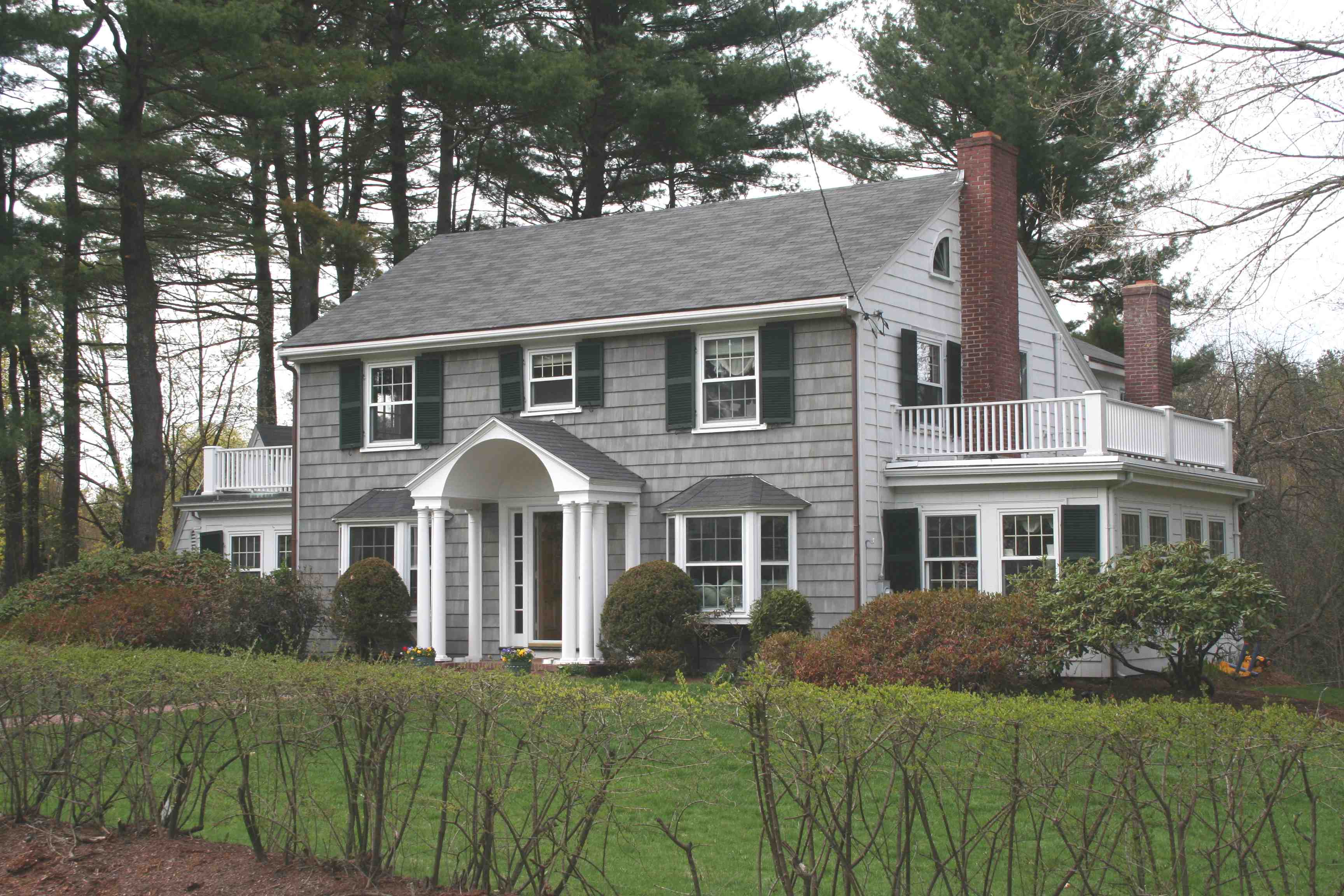 211 Conant Road
211 Conant Road (1936, Map # 8, MHC 1159) is a three-bay, 1 1/2 story shingled Colonial Revival house in the Dutch Colonial tradition, with the characteristic gambrel roof and full-width shed dormer. The gambrel roof flares out in front to form the roof of a one-story porch extending the full length of the front facade. The center entrance is framed by a simple entablature and retains its original paneled door and leaded glass half- sidelights. At the dormer level, the center of the facade is emphasized with a peaked wall gable.

3 Viles Street
The house at 3 Viles Street (1938, Map #43, MHC 1187, Photo #6) is unusual in style but draws on the Colonial vocabulary for its most salient feature, the half-round fan lights over the first floor windows and door, each accented with a white keystone that stands out against the brick façade. Brick is used for the lower story front façade but not for the abbreviated second story, which features three wall gables with diamond cut-outs in the pediments over the windows.
Ranch Houses
Beginning in 1949, one-story Ranch houses begin to appear along with the every-popular Colonials. 10 Montvale Road (1951, Map #26, MHC 1173, Photo #4) is typical in having a low-pitched roof and large plate-glass windows. 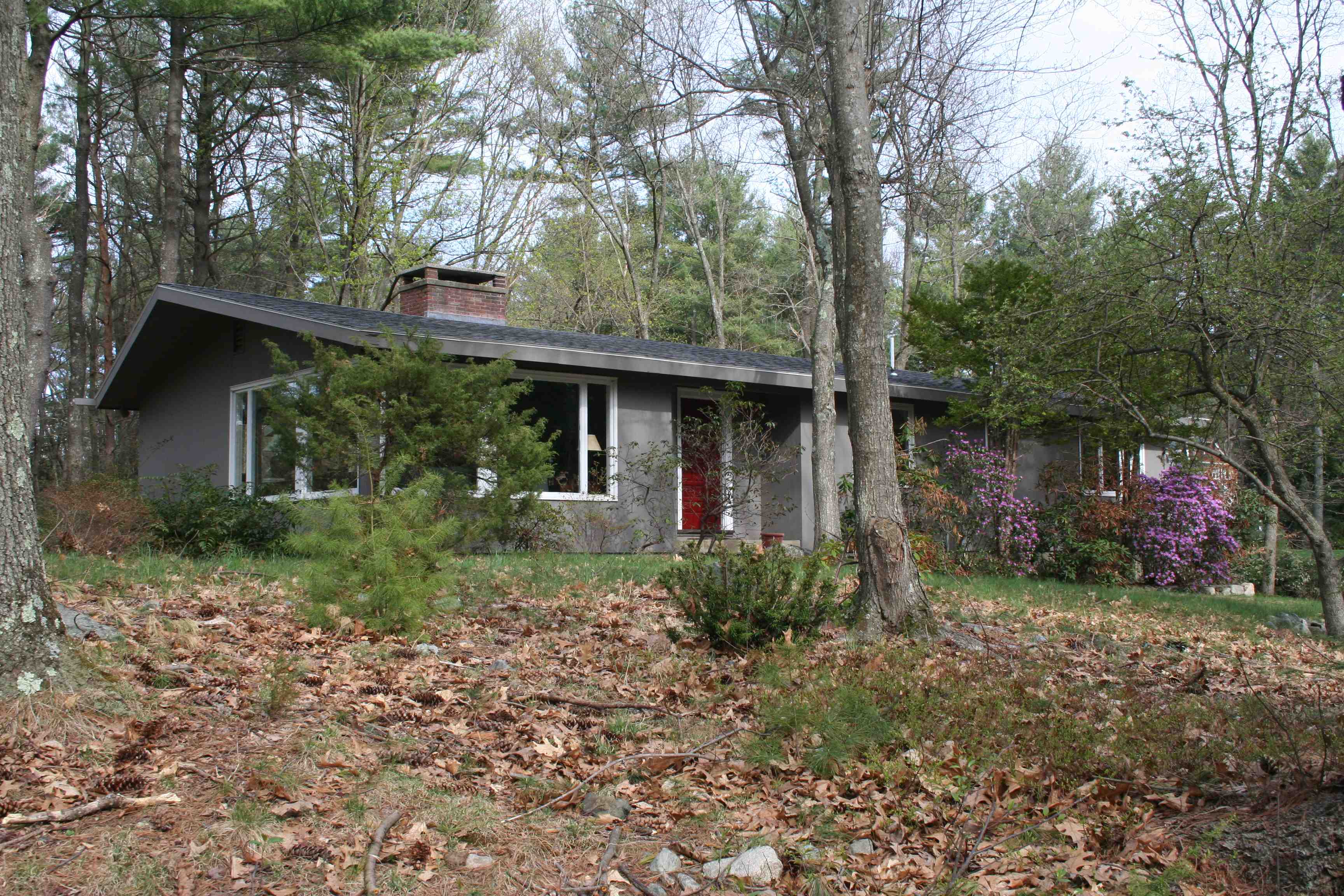